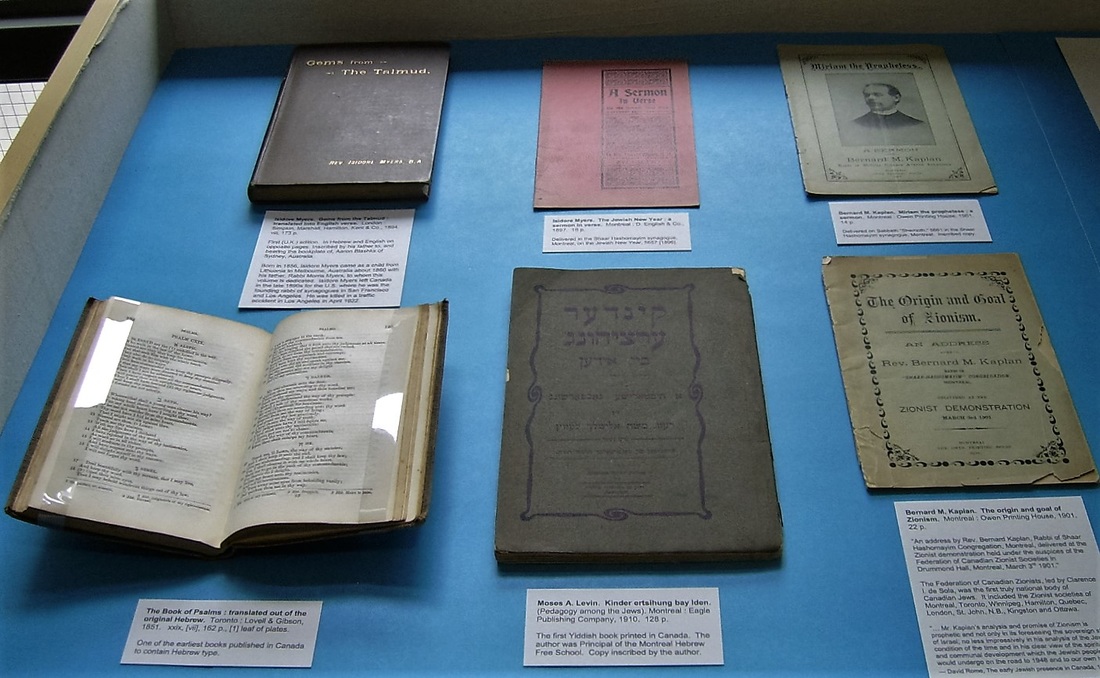 ​Gerald K. Stone has collected books by and about Canadian Jewry since the 1980s.  In 2009, he donated more than 2,000 volumes in English, French, Yiddish and Hebrew to the ​University of Ottawa Library to enhance the research value of its holdings in Judaica and strengthen the foundation for the university's Jewish Canadian studies program.  An award-winning descriptive catalog of his collection of some 6,000 publications and documents in print and electronic form has been published (see below for further details).
Pictured above is a portion of a display of Jewish Canadiana prepared by Gerald in conjunction with the Association of Canadian Jewish Studies' annual conference held May 24, 2009 at the Jewish Community Center in Ottawa.  Among the works pictured are two early printed sermons, one of the earliest specimens of Hebrew printing in Canada, and the first Yiddish book printed in Canada.

Catalog of the Gerald K. Stone Collection of Judaica: A Bibliographical Resource for Canadian Jewish Studies.  Boston: Academic Studies Press, 2020. This award-winning volume is a descriptive catalog of Gerald's Judaica collection. An introduction by Richard Menkis, Associate Professor of Jewish History, University of British Columbia, discusses the significance of the Catalog and collecting for the study of the Jewish experience in Canada.  Logically organized, indexed and selectively annotated, the Catalog identifies some 6,000 documentary resources which collectively promote an understanding of Jewish life, literature and history in Canada.

In May 2021, Gerald was interviewed for an episode of the Association of Canadian Jewish Studies' (ACJS) Meet the Author series.  In this episode, ACJS's Jesse Toufexis joins with Michelle Chesner, Norman E. Alexander Librarian for Jewish Studies at Columbia University and president-elect of the Association of Jewish Libraries (AJL), to interview Gerald about book collecting and his Catalog.
interview
​BOOK REVIEWS, PRESS RELEASES, ETC.